INSPIRING study results contribute to the extensive body of evidence for dolutegravir, the leading integrase strand transfer inhibitor, in diverse and hard to treat patient populations

John C Pottage, Jr, MD, Chief Scientific and Medical Officer, ViiV Healthcare, said, “Tuberculosis remains the leading cause of death among people living with HIV, accounting for around one in three AIDS-related deaths. Concurrent treatment of TB and HIV remains a challenge as it is compounded by drug interactions, overlapping toxicities and immune reconstitution inflammatory syndrome. This is why the INSPIRING study is so important, as we look to provide this underserved population with as many effective treatment options as possible. The INSPIRING results add to the breadth and depth of data available for dolutegravir and support its use in the treatment of people living with HIV co-infected with TB.”

INSPIRING is a phase IIIb, non-comparative, active control, randomised, open-label study in HIV-1 infected ART-naive adults with drug-sensitive TB. Of the 113 enrolled participants on a rifampin-based TB treatment for up to 8 weeks, 69 were randomised to receive dolutegravir (50mg twice-daily during and for two weeks after TB therapy followed by 50mg once-daily) with two NRTIs and 44 to receive efavirenz (600mg once-daily) with two NRTIs. The primary endpoint of the study is the proportion of dolutegravir patients with HIV-1 RNA <50 copies per mL at week 48.[1] The study, being conducted in Argentina, Brazil, Mexico, Peru, Russia, South Africa and Thailand, was not powered to show a difference between study arms and no formal statistical hypothesis was tested. 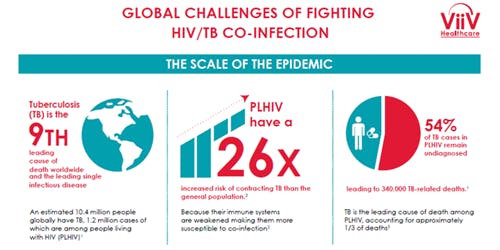 HIV stands for the Human Immunodeficiency Virus. Unlike some other viruses, the human body cannot get rid of HIV, so once someone has HIV they have it for life. There is no cure for HIV, but effective treatment can control the virus so that people with HIV can enjoy healthy and productive lives.

HIV has largely become a chronic treatable disease, with improved access to antiretroviral treatment leading to a 22% drop in global HIV mortality between 2009 and 2013, but more can be done for the estimated 36.7 million people living with HIV and 1.8 million individuals newly infected each year worldwide.[3]

INSPIRING is a phase IIIb, , open-label, multicentre, parallel-group study to assess the antiviral activity of or efavirenz-containing regimens in HIV/TB co-infected patients undergoing rifampin-based TB therapy. The study includes a screening period, a phase (Day 1 to 48 weeks plus a 4-week extension) and a open-label extension. During the open-label extension, patients were provided with until it is locally approved and commercially available, the patient no longer derives clinical benefit, or the patient meets a protocol-defined reason for discontinuation, whichever comes first.

The primary endpoint is the proportion of patients with plasma HIV-1 RNA <50 copies per (c/mL) at Week 48. Key secondary endpoints include the proportion of efavirenz patients with plasma HIV-1 RNA <50 c/mL at Week 48 and evaluation of both study arms at Week 24. Additional secondary endpoints include evaluation of the development of viral resistance, measurements of safety, tolerability and changes from baseline CD4+ counts.

Dolutegravir (Tivicay) is an integrase strand transfer inhibitor (INSTI) for use in combination with other antiretroviral agents for the treatment of HIV. Integrase inhibitors block HIV replication by preventing the viral DNA from integrating into the genetic material of human immune cells (T-cells). This step is essential in the HIV replication cycle and is also responsible for establishing chronic infection. Tivicay is approved in over 100 countries across North America, Europe, Asia, Australia, Africa Latin America.

TIVICAY is contraindicated in patients:

Risk of Adverse Reactions or Loss of Virologic Response Due to Drug Interactions:

The concomitant use of TIVICAY and other drugs may result in known or potentially significant drug interactions (see Contraindications or Drug Interactions).

Immune Reconstitution Syndrome, including the occurrence of autoimmune disorders with variable time to onset, has been reported.

The most commonly reported (≥2%) adverse reactions of moderate to severe intensity in treatment-naïve adult subjects in any one trial receiving TIVICAY in a combination regimen were insomnia (3%), fatigue (2%), and headache (2%).

USE IN SPECIFIC POPULATIONS:

There are insufficient human data on the use of TIVICAY during pregnancy to inform a drug-associated risk of birth defects and miscarriage. An Antiretroviral Pregnancy Registry has been established.

Breastfeeding is not recommended due to the potential for HIV transmission and developing viral resistance in HIV-positive infants.

Safety and efficacy of TIVICAY have not been established in patients weighing less than 30 kg or in any patients who are INSTI-experienced.

ViiV Healthcare is a global specialist HIV company established in November 2009 by GlaxoSmithKline (LSE: GSK) and Pfizer (NYSE: PFE) dedicated to delivering advances in treatment and care for people living with HIV and for people who are at risk of becoming infected with HIV. Shionogi joined in October 2012. The company’s aim is to take a deeper and broader interest in HIV/AIDS than any company has done before and take a new approach to deliver effective and innovative medicines for HIV treatment and prevention, as well as support communities affected by HIV.

For more information on the company, its management, portfolio, pipeline, and commitment, please visit www.viivhealthcare.com.

Cautionary statement regarding forward-looking statements
GSK cautions investors that any forward-looking statements or projections made by GSK, including those made in this announcement, are subject to risks and uncertainties that may cause actual results to differ materially from those projected. Such factors include, but are not limited to, those described under Item 3.D 'Principal risks and uncertainties' in the company's Annual Report on Form 20-F for 2016.