TREATING HIV: BUILDING ON 30 YEARS OF INNOVATION, INGENUITY AND PASSION

Meet Marty St. Clair, who was part of the team who discovered and helped develop the very first HIV drug.

Today, when we look at the wide range of effective treatment options for HIV, the world seems a vastly different place from 30 years ago.

When considering the heritage from our founding companies, in particular GSK, we can proudly say that ViiV Healthcare has been involved in the development of effective treatments for HIV/AIDS over this entire period of time.

HIV/AIDS Research: Its History and Future

Dr Marty St. Clair is one of the people who has been integral to our continued involvement, passion and commitment to improving the health and lives of those with HIV. Marty herself was working as a research scientist at Burroughs Wellcome (now GlaxoSmithKline [GSK]) in the early 1980s, and was part of the team who discovered and helped develop the very first HIV drug – azidothymidine (AZT, also known as zidovudine).

To commemorate the 30-year anniversary of the approval of AZT and the beginnings of HIV/AIDS research, Marty was invited to speak at the prestigious Cold Spring Harbor conference in the US in October 2016. The meeting, entitled HIV/AIDS Research: Its History and Future, focused on the history and future of HIV/AIDS research, looking at how far we have come, and what challenges remain.

Marty spoke on the discovery of AZT, providing not just a scientific overview of its development, but placing its development in sociohistorical context around the discovery of HIV and feeling/attitudes at the time. She summarised the timeline for HIV/AIDS, looking at what was actually going on at the time – the first 108 cases reported by the US Centers for Disease Control (CDC) in August 1981, the isolation of lymphadenopathy virus (LAV) in May 1983, and in 1984, the discovery of the antiviral activity of AZT by scientists at Burroughs Wellcome. 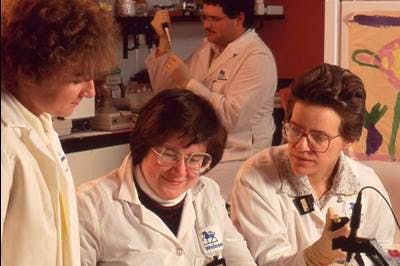 "Faced with this challenge, scientists from the world over worked together to achieve a common goal, and, given the complexities involved, this was an achievement indeed."

What was abundantly clear from her presentation was how quickly the development of AZT occurred. Within a year of the first reports of virus isolation, scientists at Burroughs Wellcome were screening compounds for anti-HIV activity. Within 18 months of the isolation of LAV they had identified the antiviral activity of AZT. Within a year or two of finding the activity of the drug in a test tube, it was showing activity in small studies – and within 6 or 7 months, the Data Safety Monitoring Board stopped the studies because it was unethical to continue the placebo arm. Finally, in just under three years from the first screening activities, AZT was approved by the US FDA on March 19, 1987.  This amazingly short timeline is testament not only to the hard work, collaboration and diligence of the scientists involved, but to the seriousness of the situation. Faced with this challenge, scientists from the world over worked together to achieve a common goal, and, given the complexities involved, this was an achievement indeed.

"These were the people who inspired not only each other, but also the next generation of HIV researchers."

There was a real personal note to Marty’s presentation – it forms part of her story. She, alongside a team of highly experienced colleagues, was directly involved in the discovery and development of AZT. These were the people who inspired not only each other, but also the next generation of HIV researchers, to continue the search for more efficacious and tolerable treatments. Indeed, Marty herself continues to be directly involved in HIV drug discovery and development.

When looking back on this, we are both proud of what has been accomplished and of what we have inspired. There are a number of challenges that remain in the field, from the stigma and discrimination still faced by people living with HIV, to political and payer-related issues. From a medical and scientific standpoint, however, perhaps the greatest challenge remaining involves the continued burden of HIV treatment. At ViiV Healthcare, some of the ways in which we are working to address this burden are through further development of new HIV compounds and novel formulations, which are being examined to potentially reduce the number of days on which patients need to administer their medicines, as well as by ensuring there are formulations suitable for paediatric use.

Perhaps the ‘final frontier’ for HIV at present though, is the idea of achieving ‘remission’ or a functional cure. Our history and the current state of research remind us that this outcome may still be some way off.  That said, achieving this goal remains a beacon of hope for scientists like Dr St. Clair.  ViiV Healthcare continues to build on its heritage by collaborating with other organisations and groups to learn and work together, to inspire each other to strive for excellence, and to ultimately improve HIV care and patient quality of life.